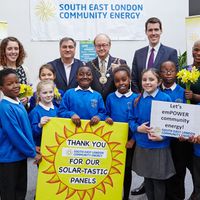 SELCE is a grass-roots community energy group who work in Greenwich and Lewisham. SELCE aims to combat climate change by generating community owned renewable energy, whilst helping those in fuel poverty. Over three winters from 2014 through to 2017, SELCE has helped over 1,940 vulnerable households to avoid having to make the choice between heating and eating. SELCE hosts friendly pop-up energy cafes, which provide clients with a better understanding of how to reduce their bills and keep warm and well in winter. SELCE also works in partnership with Childrens Centres providing tailored advice and energy saving gizmo’s to vulnerable young families. Enabling low income to access grant funded home energy improvements such as loft or cavity wall insulations is a key part of their work. Over the winter of 2017 – 18 they identified £69,398.21 of savings for clients by supporting them to get the best deal on energy and access discounts, they installed 782 ‘energy saving measures such as low energy and power down switches and enabled 81 households to access energy efficiency measures
SELCE has seven solar P.V sites, all located on school roofs and saving the hosts an estimated £311,070 in electricity costs over the 20-year project. SELCE also runs a ‘Watt’s about you?’ energy information roadshow with a portable solar sound system, touring community fetes and carnivals to raise awareness of climate change and the energy transition.

No resources have been added yet

No event coming up

We are looking for..